Looking to Move-Up to a Luxury Home? Now’s the Time!

by The KCM Crew 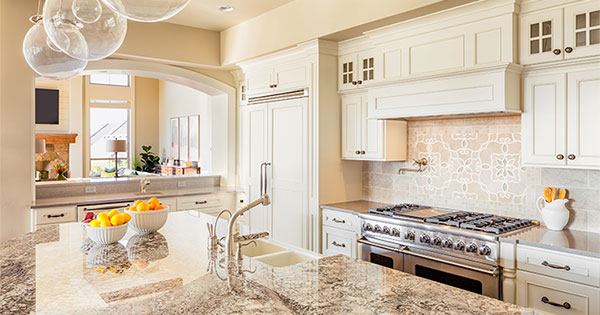 If your house no longer fits your needs and you are planning on buying a luxury home, now is a great time to do so! We recently shared data from Trulia’s Market Mismatch Study which showed that in today’s premium home market, buyers are in control.

The inventory of homes for sale in the luxury market far exceeds those searching to purchase these properties in many areas of the country. This means that homes are often staying on the market longer, or can be found at a discount.

Those who have a starter or trade-up home to sell will find buyers competing, and often entering bidding wars, to be able to call your house their new home.

The sale of your starter or trade-up house will aid in coming up with a larger down payment for your new luxury home. Even a 5% down payment on a million-dollar home is $50,000.

But not all who are buying luxury properties have a home to sell first.

In a recent Washington post article, Daryl Judy, an associate broker with Washington Fine Properties, gave some insight into what many millennials are choosing to do:

“Some high-earning millennials save money until they are in their early 30s to buy a place and just skip over that starter-home phase. They’ll stay in an apartment until they can afford to pay for the place they want.”

The best time to sell anything is when demand is high and supply is low. If you are currently in a starter or trade-up house that no longer fits your needs, and are looking to step into a luxury home… Now’s the time to list your house for sale and make your dreams come true.

We want to Thank President Jamie Duran of Coldwell Banker Residential Brokerage for this Presidents Message!  And we were honored to have been the ones that handled the Sells of these hallmark properties that were features in numerous books and received several architectural awards for its “timeless architecture.”  As quoted by us :These are stunning estates with rich history, remarkable design, and incredible vistas.  The transactions fell into place beautifully and we were fortunate to be involved with the sales” 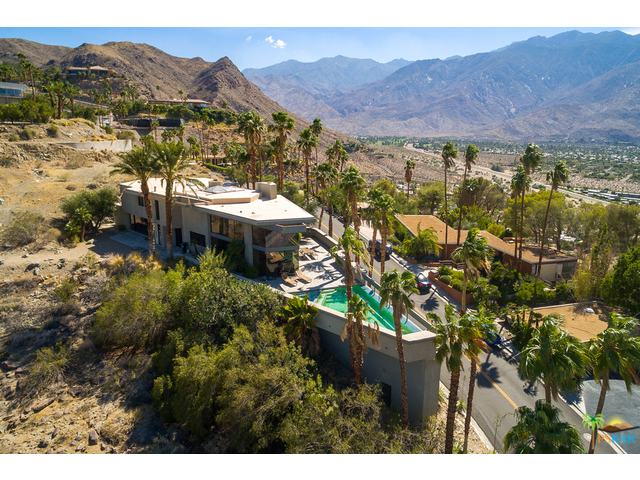 We Cat Moe & John Nelson of Nelson-Moe Properties Coldwell Banker Presidents Premier Properties would also be HONOREDif given the chance to SELL your “Timeless  Architecture” Estate as well!  Contact us TODAY!

This $2 Million Home Was Built to Look Like a Ship

But surprisingly, it’s located in the desert of Palm Springs

The “ship” is situated next to a road and surrounded by palm trees.Photo: Courtesy of Hawaii Life Real Estate Brokers

Part irony, part wishful thinking, this Palm Springs, California, home, aptly named Boat House for its shiplike exterior, happens to be located in the heart of the desert. Built in 1992 by architect Michael P. Johnson for race-car driver Jim Jeffords, the property is located on the side of a hill in the gated community of Southridge. Inside the towering glass walls, the interiors feature 14-foot ceilings. Vistas of the arid landscape and valley take center stage in the living room at the bow of the “ship.” There’s also an open-plan kitchen with sliding privacy screens, a dining area, and three en suite bedrooms, including the master suite, which features a skylight and fireplace and overlooks the living room. Outside, there’s an infinity pool and large sun deck, both with beautiful views. Listed for $2 million, this 3,905-square-foot home has 3 bedrooms and 3 baths. Contact: Coldwell Banker, 760-325-4500; coldwellbankerhomes.com

Walls of glass and wood beams surround the living room. 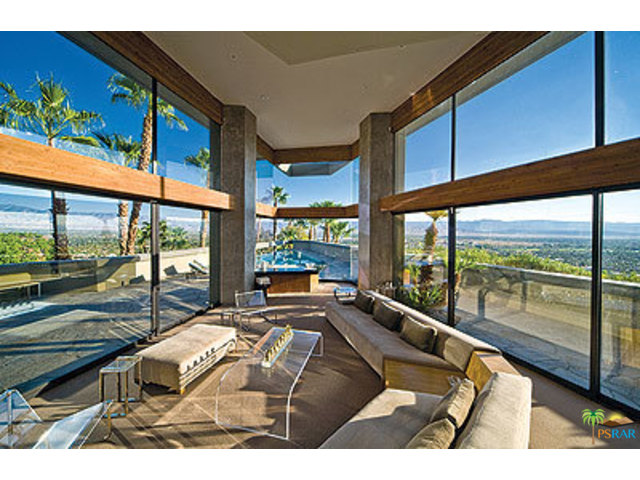 A skylight crowns the master suite. 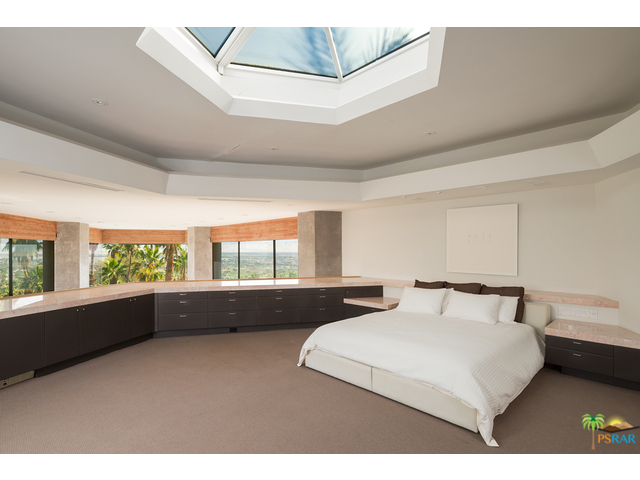 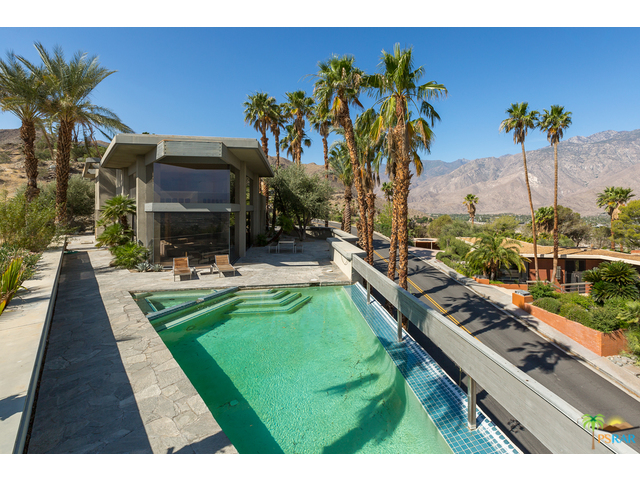 Thank you Jennifer Tzeses with Architectural digest for including our “Boat House” listing as one of your recent articles you can also see it here: http://www.architecturaldigest.com/story/ship-home-palm-springs

Famous for appearing in Diamonds are Forever, the concrete masterpiece returns to the market 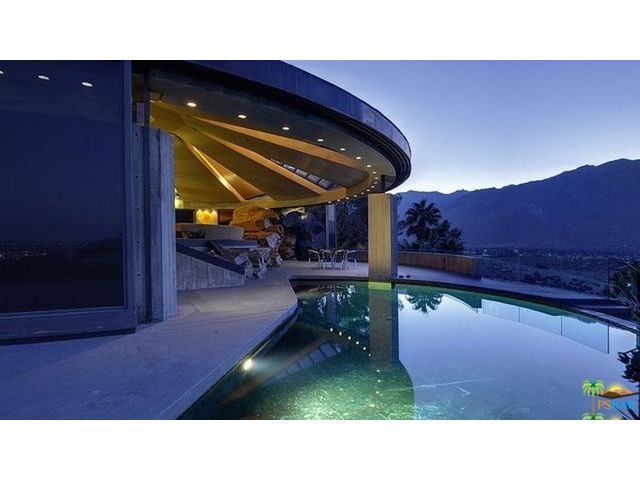 A famous modernist home in Palm Springs designed by John Lautner, known by many for its brief appearance in a Bond film, has recently been re-listed, quickly drawing attention and offers. The one-of-a-kind dwelling, which hasn’t been open to the public for years, returns to the market after a lengthy legal battle and is asking $8M, according to The Desert Sun.

Last April, Kilroy filed a petition for bankruptcy, and the creditors agreed he had until the end of 2016 to sell. Last week, local broker Nelson Moe Properties listed the home.

Designed for a noted interior designer and considered a key example of Lautner’s exemplary means of blending architecture and nature, the Elrod House is one of the most famous Modernist homes in Palm Springs. Highlights of the home’s layout include a circular concrete canopy framed by glass windows and a projecting pool deck that seems to float above the landscape.

This isn’t the only John Lautner-designed home to be in the news this year. In February, it was announced that his famous, dramatically slanted Sheats-Goldstein Residence, which made a cameo in The Big Lewbowski, was donated to the Los Angeles County Museum of Art (LACMA).

Thank you Patirck Sisson with L.A. Curbed http://www.curbed.com/authors/patrick-sisson for including our iconic famous high end real estate home as one of your articles! 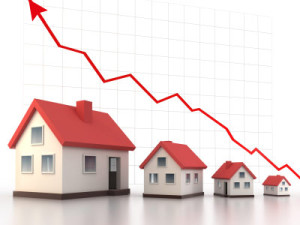 California pending home sales continued to gain steam in June, registering seven months of continued annual increases and the fifth consecutive month of double-digit increases, according to the CALIFORNIA ASSOCIATION OF REALTORS® (C.A.R.).

In a separate report, California REALTORS responding to C.A.R’s June Market Pulse Survey saw a reduction in floor calls, listing appointments, and open house traffic, compared with May. The Market Pulse Survey is a monthly online survey of more than 300 California REALTORS, Which measures data about their last closed transaction and sentiment about business activity in their market area for the previous month and the last year.

• California pending home sales were up 12.5% on an annual basis from the revised 107 index recorded in June 2014, marking the seventh straight month of year-to-year gains and the fifth straight month of double-digit advances.
• Statewide pending home sales fell in June on a month-to-month basis, with the Pending Home Sales index (PHSI) decreasing 2.6% from revised 123.6 in May to 120.4, based on signed contracts. The month-to-month decrease was slightly below the average May-June loss of 1.9% observed in the last seven years.
• A shortage of available homes in the San Francisco Bay Area stified pending sales in June, pushing the PHSI to 127.9, down 5.3% from 135.1 in May down 0.9% from 129.1 index recorded in June 2014.
• Pending home sales in Southern California continued last month’s increase by rising 4% in June to reach an index of 109.6 up 14.2% from June 2014 index of 96.
• Central Valley pending sales fell in June dropping 8.2% from May to reach an index of 99.5 in June but up 14.2% from 87.2 index of June 2014.

• The share of equity sales – or non-distressed property sales – declined slightly in June to make up 92.4% of all home sales, remaining near the highest level since late 2007. Equity sales make up 92.6% of all home sales in May and 89.9% in June 2014. The share of equity sales has been at or near 90% since mid-2014.
• Conversely, the combined share of all distressed property sales (REOs and short sales) rose slightly in June, up to 7.6% from 7.4% in May. Distressed sales made up 10.1% of total sales a year ago. Ten of the 43 counties that C.A.R. reported showed month-to-month decreases in their distressed sales shares, with Alameda and Santa Clara having the smallest share of distressed sales shares at 1%, followed by San Mateo (2%), Contra Costa (3%), and San Francisco (3%). Glenn had the highest share of distressed sales at 27% followed by Merced and Siskiyou (both at 23%) For more information, visit http://www.car.org, CALIFORNIA ASSOCIATION OF REALTORS®