Home » Uncategorized » California Market is Hot & Forecasted to Continue in 2016

California Market is Hot & Forecasted to Continue in 2016 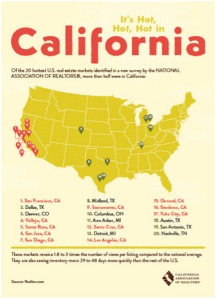 The California Association of Realtors (C.A.R.) has released its 2016 Market Forecast, and the selling trend is expected to continue to rise. The report shows home sales as projected to increase 6.3% compared to 2015’s forecast figures. This moves the expected number of home units to sell next year from 407,500 to 433,000. 2015 is moving toward an increase of 6.3% in homes sales compared to 2014 as well. This positive forecast is no surprise when you look at some of the latest statistics for California’s Real Estate Market. In a survey completed by the National Association of Realtors, our state is hotter than hot in sales compared to the rest of the country. Of the top 20 hottest markets they identified, more than half of them are in California.

The survey analyzed the number of listing views and how quickly properties sold in October 2015. Overall markets in California are seeing between 1.8 and 3.6 more viewings in a shorter span of time prior to selling, as much as 30 to 47 days faster than other markets. Despite our drought situation, and significantly higher than average home prices, we are continuing to see growth in the market. According to the forecast from C.A.R., this is due primarily to favorable interest rates and strong job growth.

Fixed mortgage rates for a 30 year mortgage are expected to increase on average only a small amount, up to 4.5%. This projected increase and the current average fixed rate of 3.88% are historical lows. Lower interest rates help more families to better afford a home loan, whether they are first time home buyers, refinancing or making a move to a new home. That the average rate will continue to hold at a low level is great news for anyone looking to buy in 2016.

Job growth in California is the other major player in our continued growth for the market. With major projects such as the Apple’s new offices in Cupertino at the south end of the Bay Area, an influx of new jobs and new residents to the area is guaranteed. With the nonfarm job growth forecasted to increase 2.3% in 2016, California’s unemployment rates is expected to decrease 5.5%. C.A.R. has forecasted it will be outlying areas which have less expensive homes, where the strongest sales will occur. This is due to the growth in jobs in logistics, manufacturing, transportation and warehousing. The areas to watch most are the Central Valley, Riverside, San Bernardino and Solano County.

California is definitely one of the hottest states for Real Estate sales. Once you have decided that you are ready to purchase We hope that you will give us Cat Moe & John Nelson of Nelson-Moe Properties the opportunity to help you with those needs.

By Nelson-Moe Group in Uncategorized on August 30, 2017.
← Mortgage Rates May Go Up, but You Can Deal: Here’s Why 2015 Survey Exclusive: Wealth, Real Estate & the High-Net-Worth Investor →